Kadie Karen Diekmeyer, better known online as “That Vegan Teacher,” was banned from Tiktok.  Diekmeyer became well known on the app after her, “Eating Animals is Wrong, McDonald’s,” song went viral in July 2020.  According to Insider, she went as far as “asking a corporate fast-food chain to change their entire menu.” As her following increased, so did criticism.  Especially after she claimed that it was “less ‘selfish’ and ‘more special’ to come out as an animal rights activist rather than LGBTQ.”  She had accumulated approximately 1.7 million followers on TikTok before it was taken down. When attempting to search her account, a message states she was “banned due to multiple community guideline violations.”

“That Vegan Teacher” was banned after 20,000 people signed a petition from Change.org that claimed she used drastic measures to force her views upon the public.  For example, the petition claims that she used her platform to create “blatantly racist, bigoted, discriminatory statements against anyone who doesn’t view veganism her way and her way alone” and promote “multiple films” that are dangerous to children. Diekmeyer claimed she used her platform “morally and ethically.”

A few hours after she was banned, she turned to her platform on YouTube that has about 32.4K subscribers, to deny certain accusations. She defended herself by saying she never forced veganism on anyone and even claimed “Veganphobia” was real. According to her, people have allegedly “left dead animal body parts on  [her] front steps.  Eggs were thrown over [her] fence. Death threats were uttered. Groups of people tried to steal [her] dog, Bella.”

She attempted to retract a shocking statement she made on one of her TikTok videos where she comparing the killing animals with the murders of millions of Jews during the Holocaust, because animals are crammed into places just as horrible as the Nazi death camps. She now challenges her audience to “rise up” and stand with her, as she views her banning as a form of silence towards animal rights activists. 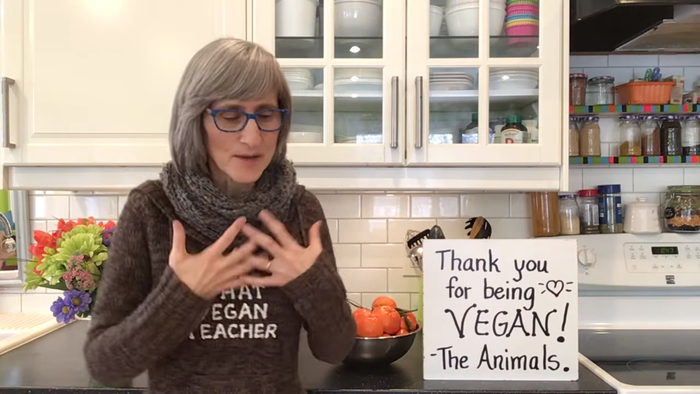