Bad Bunny had his first live performance of 2021 at the WWE’s Royal Rumble Sunday night January 31.  It was also the first time, “Booker T,” a song from his most recent and third album of 2020, El Último Tour Del Mundo, was performed live. “Performing at the Royal Rumble is a childhood dream come true,” said Bad Bunny. “I have been a lifelong fan of WWE and I am excited to take the stage and entertain fans around the world.”

Bad Bunny was inspired by the wrestling legend himself, Booker T.  Just like the wrestler, Bad Bunny talks about being at the peak of his career and being a champion throughout the song. According to Neil Lawi, Senior Vice President and General Manager, WWE Music group, “Bad Bunny is at the top of the music industry, and a pop culture icon with strong ties to WWE and our fans around the world. We are thrilled to provide a global platform for his first-ever live performance of ‘Booker T’ as we kick off the road to WrestleMania.”  Sunday’s performance resembled the “Booker T” music video.  WWE legend Booker T was posing at the center of the stage and the Latin artist performed around him.  Bad Bunny even passed the mic so the wrestler could yell his signature catchphrase, “Can you dig it, sucka?!”.

Later on, WWE Superstars, The Miz and John Morrison tried to convince Bad Bunny into making a deal with them and join the WWE in exchange for helping them record an album. Bad Bunny declined their offer. After the Miz wrecked Bad Bunny’s DJ set on stage, he pushed past the referees and went onto the ring, where he frog splashed Miz and Morrison from the top of the rope.

Definitely not bad for a WWE amateur. 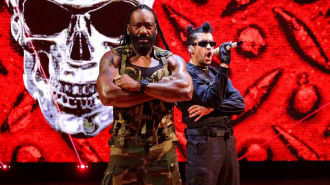